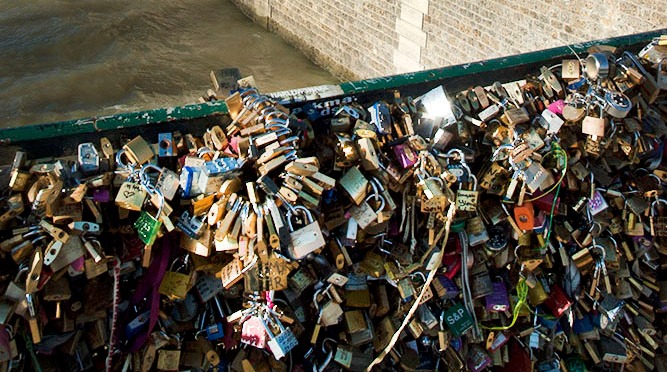 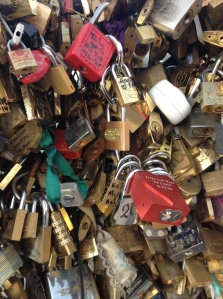 I hadn’t been paying attention to the bridges in the center of the city; I was too busy building a life in the 11th arrondissement. Then in November, I saw what had become of the Pont de l’Archevêché, a tiny bridge that connects Notre Dame with Quai de Montebello. In what seemed like mere months, it had been inundated by an infestation of locks, a dense metallic clump of “love,” that crept over the side of the bridge like a fungus. And the size of some locks was shocking—huge, some up to four inches across (10cm). Heavy bike locks had been attached to the bridge, seemingly to create an additional surface for hanging more locks since all the available meshing was used up. Graffiti had sprouted on the stone wall where locks were unable to be attached. People had taken to scratching messages in the paint on the railing. This wasn’t love. It felt like madness, like an invading army had seized the bridge. I’d known the Pont des Arts was falling prey to this mania, but now this bridge? I became like a crazy person. This was a bridge too far.

I dashed off a post on my blog, My (Part-time) Paris Life, which went viral, lighting a fire under my friend Lisa—and the rest is history. No Love Locks was born.

We’ve since discovered that Pont de l’Archevêché is known as “Lovelock Bridge”—say what?—and is touted as such by tour guides and Google maps alike. That’s hair-pulling stuff. Were Lisa and I the only ones who thought this was a bad idea?

Seems not. Our followers are increasing faster than we would have imagined, and we’ve already been tweeted and re-tweeted, blogged and re-blogged just a few weeks into our project. Now, the press is taking notice. Our petition (ici en français), launched on 9 March, has garnered more than 1,000 signatures in just over five days. In our latest effort, we’ve sent an open letter to the candidates for the March municipal elections in Paris, asking them for their position on the issue. We await their responses.

It’s official: We’re a movement. For those not convinced, or on the fence, stay with us; what you will see in coming posts may surprise you—and change your mind. We’re not kooks or love-haters; we’re reasonable human beings who want to protect historic structures—and the beauty of our cities—from what’s sadly become rampant vandalism. Join us, will you? Sign our petition today.
—Lisa Anselmo

Here, a few photos of what turned Les Deux Lisas into accidental activists:

Free Your Love. Save Our Bridges.

AN IMPORTANT ANNOUNCEMENT: Some commenters have been proposing the use of bolt cutters on the bridges. We are opposed to actions of this kind. Our mission is only to increase awareness of the problems created by these padlocks, and to seek measures to fight against this plague by working in partnership with the City of Paris. We are therefore now blocking all such comments here and on our Facebook site. Thank you for your support and understanding. - No Love Locks™

We've been spotted by: